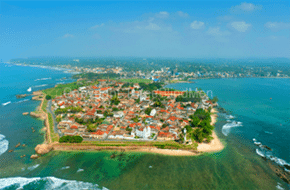 173km from Colombo, has the distinction of being the best-preserved sea fort in South Asia. A living heritage site, this 90 hectare (222 acre) attraction is a superb blend of architecture, with fortifications that resemble those in the coastal areas of Portugal. The fall of Galle to the Dutch in 1640 saw its fortifications consolidated further along the lines of the fortified cities of Europe. The Dutch and the English colonial styles are evident in the area still today.
Originally established by the Portuguese in the 16th Century.