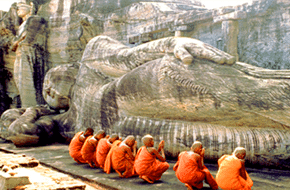 Polonnaruwa was the second capital of Sri Lanka after the destruction of Anuradhapura in 993. Polonnaruwa bears witness to several civilizations, of the Sinhalese sovereigns during the 12th and 13th centuries. This immense capital created by the megalomaniac sovereign, Parakramabahu, in the 12th century, is one of history’s most astonishing urban creations, both because of its unusual dimensions and because of the very special relationship of its buildings with the natural setting. It is also a shrine of Buddhism and of Sinhalese history